Lucentis vs Avastin study may feature at May 1-5 congress

Lucentis vs Avastin study may feature at May 1-5 congress

Lucentis at risk if far cheaper Avastin proves as good

Lucentis brings in $1.5 bln/yr for both Roche and Novartis

LONDON, March 30 (Reuters) - Results of the so-called CATT study comparing Roche (ROG.VX) and Novartis's (NOVN.VX) eye drug Lucentis with low doses of cancer treatment Avastin may be presented at a medical meeting in early May.

Billions of dollars of Lucentis sales hinge on the head-to-head comparison. If Avastin -- another Roche drug -- proves as good as Lucentis it will offer an alternative for age-related eye disease at a fraction of the cost.

Industry sources said they expected the study to feature as a "late-breaking" presentation during the May 1-5 annual meeting of the Association for Research in Vision and Ophthalmology (ARVO) in Fort Lauderdale, Florida.

ARVO itself is not giving anything away. "At present I am unable to confirm that there will be a presentation of the CATT study at the ARVO annual meeting," said Jo Olson, the organisation's director of communications.

The U.S. National Eye Institute -- the government-backed research centre that is sponsoring the CATT study -- also declined to say exactly when the results would be unveiled, although it reiterated it would be "in spring".

The outcome of the U.S. trial is important not only for the two Swiss drugmakers but also Germany's Bayer (BAYGn.DE), which is developing a rival eye drug called VEGF Trap-Eye with Regeneron (REGN.O).

Although no-one knows for sure, most analysts expect Avastin to prove as effective as Lucentis in the 1,200-patient test, partly because the trial allows a generous margin for measuring non-inferiority. 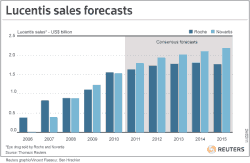 Roche sells Lucentis in the United States, while Novartis sells it elsewhere. Last year, the two firms each generated around $1.5 billion in Lucentis sales and some analyst models suggest it could go on to become a $10 billion-plus drug.

That promise may not be met, however, with Avastin as a rival.

Avastin is not licensed for use in the eye but it works in a similar way to Lucentis, and the tiny amount needed for an eye injection costs only around $50, against a U.S. price of $1,950 for Lucentis.

Many doctors, particularly in the United States, already use Avastin "off label" to treat wet age-related macular degeneration (AMD) because, just like Lucentis, it stops the growth of blood vessels that can leak in the retina.

It could potentially cause more side effects, but this may not emerge as an issue in the CATT study, given its limited scope.

Possible safety issues associated with using Avastin in the eye are also expected to be discussed at the ARVO meeting, with the presentation of data from other research groups looking at real-life use of the medicine in treating AMD patients.

Some analysts believe there may be an increased risk of stroke and death with Avastin because it does not bind so tightly to the site of action in the eye and is could therefore have greater systemic side effects.