AMD: The beam of energy that could save you from blindness

The beam of energy that could save you from blindness

The beam of energy that could save you from blindness 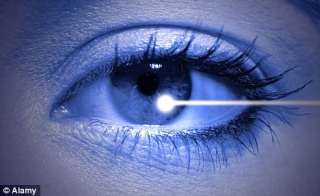 A hand-held device, which resembles the torch that doctors use to examine the back of the eye, uses the waves to help drugs get into the eye

A hand-held device that fires sound waves into the eye could help prevent age-related macular degeneration (AMD), a leading cause of blindness.

The gadget uses the waves to help drugs get into the eye without the need for painful injections.

Early stage animal studies show the treatment is effective, does not need a local anaesthetic as injections do, and reduces the risk of infections.

Trials on people are due to start in the next few months, but because the device uses the same drugs as the injections, it could be fast-tracked into widespread use within two to three years.

AMD affects around 600,000 people in the UK. It usually develops after the age of 50 and is caused by the growth of new blood vessels over the macula - a small oval-shaped area at the back of the eye that helps us pick out visual details clearly.

The condition makes it difficult to recognise faces, read or watch TV as the central vision is blurred.

As well as the ageing process, other factors that increase the risk of developing it are smoking, years of frequent exposure to sunlight and regularly drinking too much alcohol. There are two types of the condition - Wet and Dry.

The dry form accounts for 90 per cent of cases, but rarely leads to blindness.

Wet, however, is more serious and can cause significant loss of vision within two years. It is called Wet AMD because the blood vessels can leak fluid, leading to blurred vision.

There are a number of treatments to slow progression of the disease. These include Lucentis, a drug which works by blocking a chemical - vascular endothelial growth factor - which triggers the development of harmful blood vessels.

Studies show these kinds of drug can slow vision loss in about 90 per cent of patients and for about a third of these, their eyesight will actually improve.

But the drugs have to be injected into the corner of the eye using a long fine needle under local anaesthetic.

The patient receives a monthly jab for three months, after which vision is monitored to see if it changes. If it gets worse, another course of jabs is given. 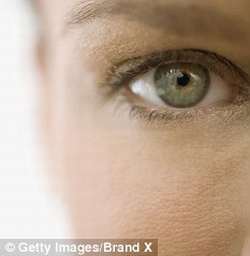 Age-related macular degeneration affects around 600,000 people in the UK

But the new device could be a less painful solution. The hand-held gadget, which resembles the torch that doctors use to examine the back of the eye, contains a small container that holds a gel. This gel contains tiny particles of Lucentis.

The small container fits snugly over the eye, so the gel comes into direct contact with the outer surface. At the press of a button on the handset, sound waves are transmitted though the container.

As the sound waves hit the gel, the tiny drug particles vibrate and break away from it.

The sound waves then propel the particles painlessly on to the surface of the eye.

The sound waves also trigger a process called sonopherosis, where fat cells in the eye momentarily shrink and separate from each other.

This allows the drug molecules to pass through the outer surface of the eye and penetrate the fine network of blood vessels inside.

Once in the bloodstream, the drug gets transported to the damaged macula, rather than being injected into it.

Commenting on the research, Winfried Amoaku, president of the Royal College of Ophthalmologists, said: "Any development that will allow safe delivery to the back of the eye without injections is welcome.

"There are risks, such as infection, associated with injection delivery, especially when repeated so often."

Meanwhile, a new treatment which could halve the number of painful eye injections for Wet AMD could be licensed in Europe within three months. The new drug, called VEGF Trap-Eye, works in a similar way to standard treatments but stays in the eye for longer. This means it can be given as an injection every other month rather than once a month.

Manufacturers have reported promising results from two trials involving over 2,400 patients, comparing 2mg doses of VEGF Trap-Eye given every two months with the current monthly doses of Lucentis of 0.5mg.

Around 95 per cent of both groups maintained their sight.

An application for a drug licence is expected to be made in Europe by the end of June.

However, the drug would still need to be approved by NICE. If successful, it could become available before the end of 2011.

Overview: Ultrasonic - Needle-Free Technology For The Treatment Of AMD